India: You're Criminal if You're Gay (A Mother Speaks Out)

(The following article appeared in The Times of India on January 26. It had the title “A Mother and a Judge Speaks Out on Section 377.” Along with the accompanying poem by Vikram Seth, the essay was republished and made freely available by the New York Review of Books and the authors. Wayves is grateful for the opportunity to share these words with our readers. - Ed.)

I am eighty-three years old. I have been in a long and happy marriage of more than sixty years with my husband Premo, and am the mother of three children. The eldest, Vikram, is a writer. The second, Shantum, is a Buddhist teacher. The third, Aradhana, is an artist and filmmaker. I love them all. My husband and I have brought them up with the values we were brought up with—honesty, courage, and sympathy for others. We know that they are hardworking and affectionate people who are trying to do some good in the world.

But our eldest, Vikram, is now a criminal, an unapprehended felon. This is because, like many millions of other Indians, he is gay; and last month, two judges of the Supreme Court overturned the judgment of two judges of the Delhi High Court that, four years ago, decriminalized homosexuality. Now, once again, if Vikram falls in love with another man, he will be committing a crime punishable by imprisonment for life if he expresses his love physically. The Supreme Court judgment means that he would have to be celibate for the rest of his life or else leave the country where he was born, to which he belongs, and which he loves more than any other.

I myself have been a judge for more than fourteen years—first as a judge on the Delhi High Court, then as Chief Justice of the Himachal Pradesh High Court. Later, I served as a member of the Law Commission, as well as the Justice J.S. Verma Committee, which resulted in the Criminal Law Amendment Act 2013 being passed. I have great respect for legal proprieties in general, and would not normally comment on a judgment, but I am making an exception in this case.

The government found no fault with the judgment and did not appeal. However, a number of people who had no real standing in the matter did challenge it. Two judges of the Supreme Court heard the appeal in early 2012. Then, twenty-one months later, and on the very morning of the retirement of one of them, the judgment was finally pronounced. The Delhi High Court judgment was set aside, Section 377 was reinstated in full, and even private, adult, consensual sexual acts other than the one considered “natural” were criminalized again.

As the mother of my elder son, I was extremely upset. But as a lawyer and a former judge, I decided to reserve my views till I had read the judgment. When I read it, it would be true to say that I found it difficult to follow its logic.

A host of academics and lawyers have critiqued the judgment in great detail, including the nonaddressal of the Article 15 argument, and have found it wanting in many respects. I do not intend to repeat those criticisms. However, I should point out that both learning and science get rather short shrift. Instead of welcoming cogent arguments from jurisprudence outside India, which is accepted practice in cases of fundamental rights, the judgment specifically dismisses them as being irrelevant.

Further, rather than following medical, biological, and psychological evidence, which shows that homosexuality is a completely natural condition, part of a range not only of human sexuality but of the sexuality of almost every animal species we know, the judgment continues to talk in terms of “unnatural” acts, even as it says that it would be difficult to list them.

But what has pained me and is more harmful is the spirit of the judgment. The interpretation of law is untempered by any sympathy for the suffering of others.

The voluminous accounts of rape, torture, extortion, and harassment suffered by gay and transgender people as a result of this law do not appear to have moved the court. Nor does the court appear concerned about the parents of such people, who stated before the court that the law induced in their children deep fear, profound self-doubt, and the inability to peacefully enjoy family life. I know this to be true from personal experience. The judgment fails to appreciate the stigma that is attached to persons and families because of this criminalization.

The judgment claimed that the fact that a minuscule fraction of the country’s population was gay or transgender could not be considered a sound basis for reading down Section 377. In fact, the numbers are not small. If only 5 percent of India’s more than a billion people are gay, which is probably an underestimate, it would be more than 50 million people, a population as large as that of Rajasthan or Karnataka or France or England.

But even if only a very few people were in fact threatened, the Supreme Court could not abdicate its responsibilities to protect their fundamental rights, or shuffle them off to Parliament. It would be like saying that the Parsi community could be legitimately imprisoned or deported at Parliament’s will because they number only a few tens of thousands. The reasoning in the judgment that justice based on fundamental rights can only be granted if a large number of people are affected is constitutionally immoral and inhumane.

The judgment has treated people with a different sexual orientation as if they are people of a lesser value.

What makes life meaningful is love. The right that makes us human is the right to love. To criminalize the expression of that right is profoundly cruel and inhumane. To acquiesce in such criminalization or, worse, to recriminalize it is to display the very opposite of compassion. To show exaggerated deference to a majoritarian Parliament when the matter is one of fundamental rights is to display judicial pusillanimity, for there is no doubt that in the constitutional scheme it is the judiciary that is the ultimate interpreter.

A review petition is now up for hearing before one of the two original judges plus another, who will replace the now retired Justice Singhvi. It will be heard in chambers. No lawyers will be present.

I began by saying that Premo and I had brought up our children to believe in certain values. I did not mention some others that we have also sought to inculcate in them: to open their hearts and minds; to admit their errors frankly, however hard this may be; to abjure cruelty; and to repair in a willing spirit any unjust damage they have done to others. 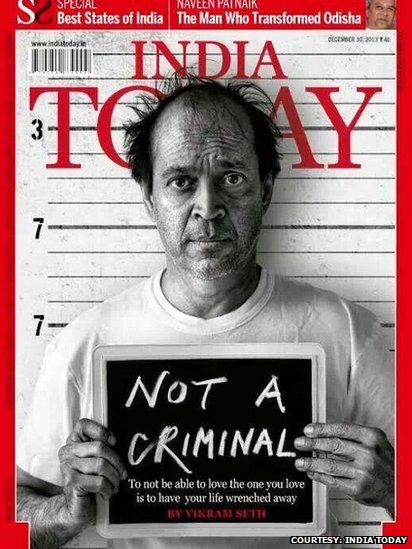 Poet and novelist Vikram Seth on the cover of India Today.

Through love’s great power to be made whole

In mind and body, heart and soul—

Through freedom to find joy, or be

By dint of joy itself set free

In love and in companionhood:

This is the true and natural good.

To undo justice, and to seek

To quash the rights that guard the weak—

To sneer at love, and wrench apart

The bonds of body, mind and heart

With specious reason and no rhyme:

This is the true unnatural crime.

The above essay and accompanying poem may be reproduced free of charge by any person or publication, without permission from The New York Review or either of the authors.