After a summer underground, Halifax's only LGBTQ bar is ready to bloom.

The Queer Garden launched this June in a north-end backyard as a temporary outdoor space for people to gather, and held their final event Saturday night with a Halloween dance.

But, the party isn't over yet. The team behind the Garden is looking for a permanent space.

"It's exceeded our expectations. We started the project with hopes of, you know, 'If we build it, they will come,'" said Queer Garden co-founder Mike Scaife on Saturday, surrounded by carved pumpkins and Halloween decorations in the trees. 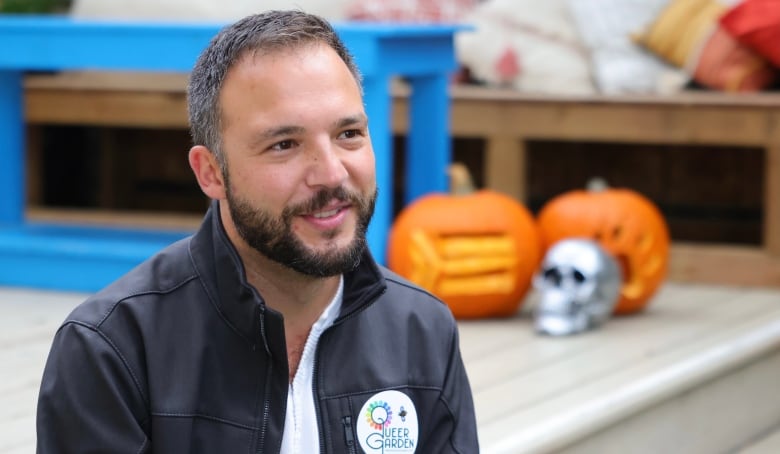 Mike Scaife, co-founder of the Queer Garden, hosted underground dance parties and events in his backyard this summer. (Jeorge Sadi/CBC)

"The support that we've received by doing this, the positivity, the great vibes, everybody coming as they are and who they are, it's just been wonderful."

Scaife, whose backyard hosts the Garden, joined together with Justin Chevrette and Erin Delorey for the project. All three have backgrounds in the food and service industry, and both Scaife and Delorey have quit their day jobs to focus solely on the Garden.

From the street, the only sign that something unique exists is the bright gate painted with the rainbow Pride and trans flag colours. As it swings open, people are often greeted by the Garden mascot — Scaife's terrier, Hank. 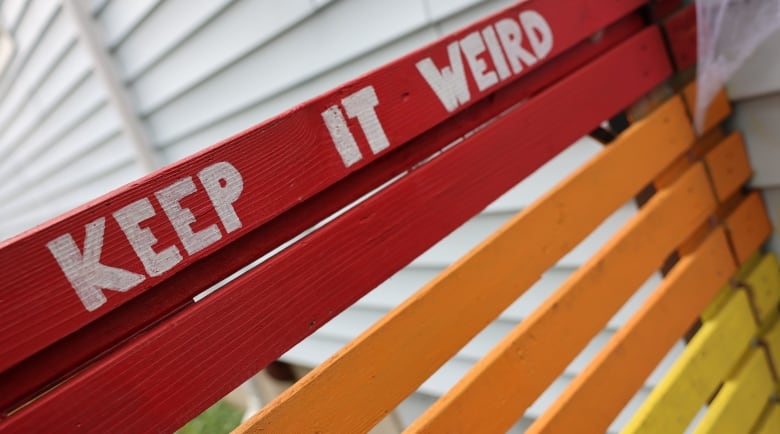 The gate leading into the Queer Garden in Halifax. (Jeorge Sadi/CBC)

Scaife said the idea came out of COVID-19, combined with the fact there are very limited queer spaces left in Halifax. Since Menz and Mollyz closed last year, Halifax hasn't had a dedicated LGBTQ bar.

"After the pandemic and isolation and lockdowns, we just felt the importance of being able to create a support structure, and we felt like a lot of people didn't have that access," Scaife said.

While the team wanted to create a space where anyone could feel comfortable and meet other people outside of a computer screen, limited funds meant starting with a grassroots project in Scaife's backyard with smaller group numbers. 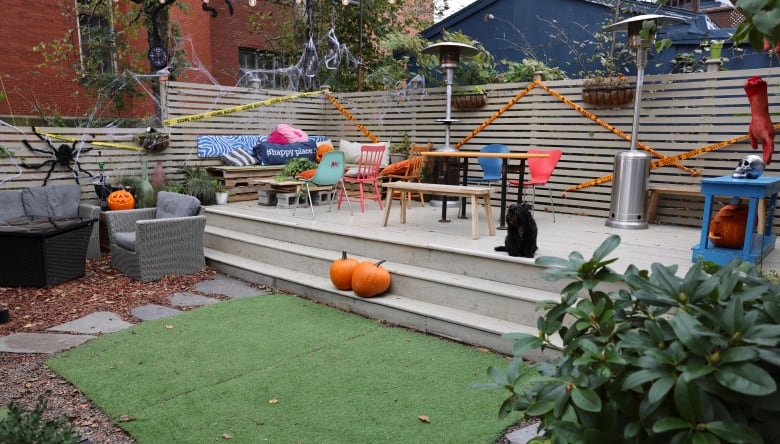 The Queer Garden space in Halifax's north end before its final party on Saturday night, including Hank the terrier. The team behind the project are now crowdfunding to help create a permanent home. (Jeorge Sadi/CBC)

Anyone who showed up to attend the weekly silent dance parties, or RuPaul Drag Race nights, only got the address after making a reservation online. Scaife said that the "speakeasy" factor kept people safe and comfortable.

"It's very simple things like, 'Can I hold my boyfriend's hand?'" Chevrette said, pausing for a moment with tears in his eyes, before smiling widely.

"And this is not a question here. You can do whatever you want and you're going to be celebrated for it." 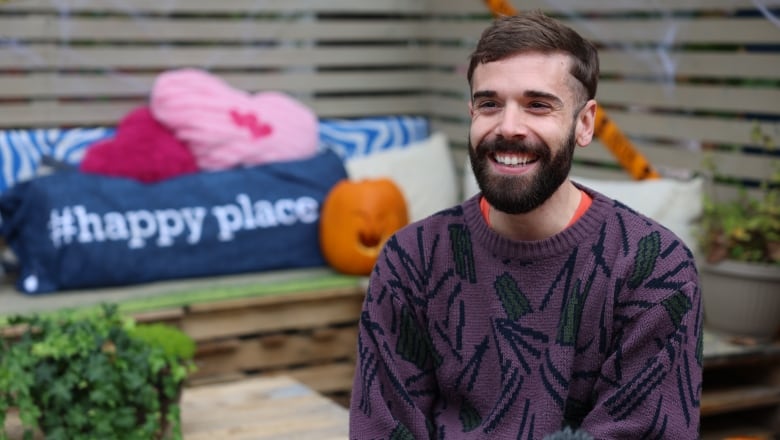 Justin Chevrette, co-founder of the Queer Garden, says he's proud to have a built a space where everyone can fully be themselves. (Jeorge Sadi/CBC)

Travelling to different countries, Chevrette said he'd always seek out the queer communities to make friends and feel comfortable, but until the Garden he hadn't found that atmosphere in his own city.

It's been especially important to create a fun, safe space for trans, non-binary and gender non-conforming Haligonians, Chevrette said, which is a "beautiful thing" but they often don't feel welcome in other bars.

Honorine Ikirezi has been a fixture at those weekly dance parties, and most events, since she came by herself to the Garden one night this summer.

Ikirezi, who goes by the nickname Happy, said she's become fast friends with the Garden owners and met so many great people through the space. 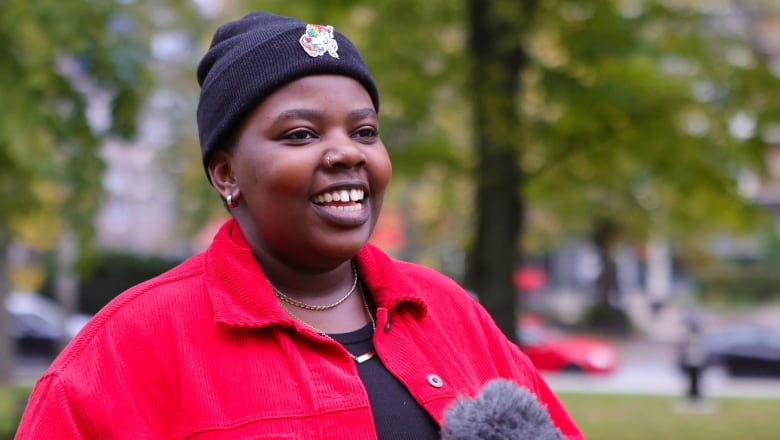 Honorine Ikirezi says the Queer Garden has helped her make lots of new friends, and having a queer community to turn to has become a valuable part of her life. (Jeorge Sadi/CBC)

Since moving to Halifax from Rwanda in 2017 to go to school, Ikirezi said this was the first time she felt like she'd found a queer community.

"It's really important to actually, you know, meet people that I can relate to," Ikirezi said. "You belong … it feels like I have this little family in Halifax."

The team is now crowdfunding to create the Queer Garden Cafe & Lounge, with a goal of $55,600 to go toward a permanent location.

Chevrette and Scaife said they want it to be a space for the community to call their own, with great food and drinks as well as queer artists and performers. 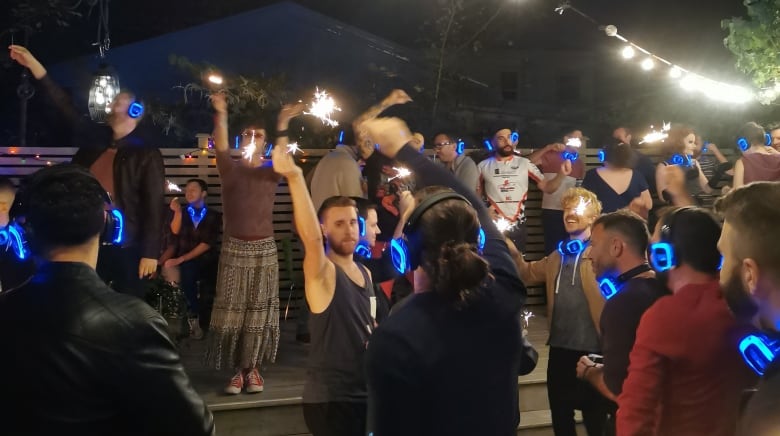 Visitors to the Queer Garden dance during a silent disco event one Saturday this summer. In these parties, everyone is listening to the same music pumped through headphones. (Queer Garden)

"We want it to overflow from the street that we're on, from the north end into the rest of the province. We want people to come and share and bring it to their own communities. We just want it to grow."

While the Garden has closed up for the year in their original space, they plan to host pop up events in other places around Halifax until they find something permanent.