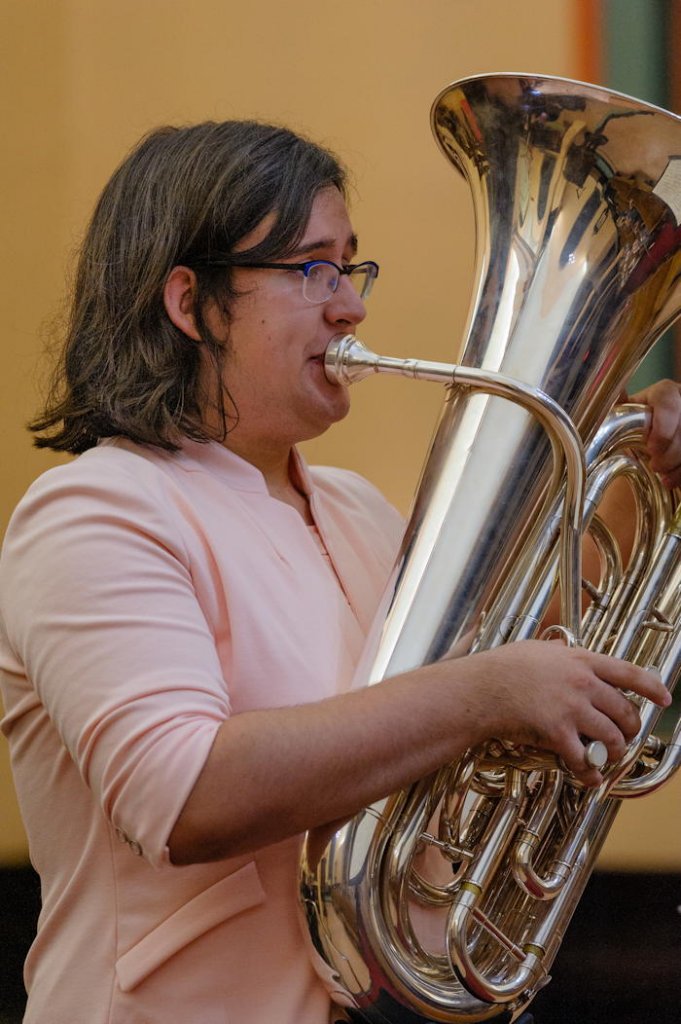 Not content with just keeping up with the beat of someone else’s drum, transgender classical music composer Hope Salmonson (she/they) took a leap of faith away from the shallow waters of predictable orchestral pieces, and made a splash of her own. Her debut song, titled ‘At a Dinner Party’, not only recently saw publication in New Music Shelf’s Anthology of New Music: Trans & Non-Binary Voices Vol 1, but is the first composition in the book of featured queer voices and creative talents.

“As terrified as I am at the premise of being noticed,” joked the soon-to-be Mount Allison grad, “I’m also really really humbled and grateful for the chance to get my work out there”, noting that it’s nearly unheard of for a young composer to ever be published, let alone an openly trans artist.

Written in 2019,  ‘At a Dinner Party’ is based on  a poem by the Victorian writer Amy Levy. It's playful, daring and bold, teasing the audience right alongside Levy’s original readers.

“The moment I read it, it screamed queerness to me” said Salmonson, recognizing the poem’s moment of a furtive but curiously knowing glance as one all too familiar to the LGBTQI2+ community. “But at the same time, how much loneliness and how much nervousness must have come into that too, the idea that she had to repress a lot of her queer identity throughout her life”

What results is a light hearted piece that plays equal parts “excitement and mischief meets an introspective need to hide oneself”, a struggle Hope herself faced back when she enrolled at Mount Allison in 2017 as a hopeful tuba player with aspirations of playing in a professional symphony.

While not the first time any of her academic work has been published, her 2019 essay ‘Not Quite Romeo’ on the long time romantic relationship of French composer Hector Berlioz and actress Harriet Smithson, ran in the Nota Bene: Canadian Undergrad Journal of Musicology, ‘At a Dinner Party’ is her first widely available composition, printed just a short five years after putting down the dry, over-saturated and often times problematic-on-inspection sheet music of the tired cis-hetero white men who make up the bulk of Western classical music.

“As I was going through university, I realized I wasn’t seeing primarily the music I wanted to represent”, said Salmonson, “and the reality is, there’s one tuba in an orchestra, and one orchestra in the province, most times, Nova Scotia is lucky enough to at least have two, but typically positions for tubists are few and far between”.

After years of performing traditional pieces, Hope is unwilling to play and celebrate the works of many “greats” of classical composition, some of whom held deplorable political and racial beliefs. She struck pen to paper on her own, in the hopes of opening the space to more queer and outsider creative voices. What started as a frustrated hobby quickly grew into so much more.

“And I think that’s where I've found my passion, in my ability to represent my identity, not just as a trans woman or a queer person, but as a full human being, and being able to connect with others who play and listen to my music, they are able to bring their identity to the table, and somewhere in the middle between what I wrote and what they play, I found a far more important meaning of music to me”.

Now, as the newly published composer finds herself poised on the precipice of a career she never dreamed of, and the possibility of grad school ahead of her, Hope’s advice to other up and coming queer creators is to never be afraid of making mistakes. “If not for paths winding up in dead ends, I wouldn't be where I am now. Make your mistakes, learn from them, and grow towards the future”.

You can hear Hope's piece at this link.