Hannah Cameron (she/elle) is a student at Dalhousie Medical School, a Doctor of Medicine candidate in the class of 2024, and Pam Brown's granddaughter.  This article is also published as a biography in the Halifax Rainbow Encyclopedia. 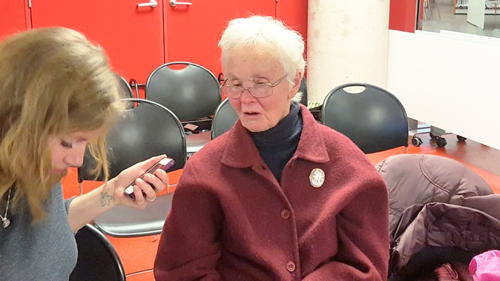 Dr. Pam Brown was a sex-positive, LGBTQ+-friendly healthcare provider in Halifax for 45 years. Trained as a medical doctor in London, England, she moved to Halifax in 1960. While working alongside midwives in economically marginalized parts of large British cities, she had noticed a disparity in the availability of family planning services and counselling compared to more affluent areas. When she moved to Canada, she learned that family planning clinics were not legal here at all.

In 1969, the law began to allow family planning information and services in the community in Canada, and not only in doctors' offices. Pam noted that the first services were, once again, primarily offered to women of privilege. In 1970, she joined a group of volunteers who were committed to providing sexual and reproductive healthcare from a pro-choice philosophy.

In 1973, the Family Planning Association of Nova Scotia opened a small clinic on Gottingen Street, in an old bank vault equipped with a phone line, a small office, committed volunteers, and two physicians - Pam was one of them. The clinic evolved into Planned Parenthood Metro Clinic, moving to Veith House, where Pam spent her committed and compassionate career. When she retired at age 75, the clinic had become the Halifax Sexual Health Centre.

Through her work at Planned Parenthood, Pam began to do speaking engagements at high schools in the metro area. She was an important mentor in the creation of teen health centres and an early advocate of same-sex-inclusive sex education.

In the early 1970s, Pam was sought out to teach the inaugural sexuality course at the Dalhousie University Faculty of Medicine. She joined the planning committee and was its chair for 10 years. Under her leadership, the course expanded to include the School of Nursing, the School of Social Work, and the Atlantic School of Theology.

In 1982, after training with Drs. Bill and Jean Morse, themselves students of Masters and Johnson; Pam began offering sexuality counselling through Dalhousie Family Medicine. She was a local pioneer in the provision of same-sex relationship counselling, known throughout the region as an ally who challenged individual and institutional practices of heterosexism and homophobia. It was particularly noteworthy for a physician to counter the medical discourse which either excluded or pathologized sexual desires and behaviours beyond the heteronormative. Pam was a trailblazer in many ways, and can be seen marching with purpose in archival footage of the first ever Gay Pride March in Halifax.

After her retirement, Pam took her convictions to the United Church of Canada, where she served on the national study group on Sexual Orientation and Eligibility for Ministry. This was integral to the United Church's landmark 1988 decision to endorse the ordination of gay, lesbian, and bisexual ministers. She was recruited to teach at the Atlantic School of Theology in the 1990s, a role she took on with attention to advocacy, gender justice, and relations of power. She was the recipient of an Honourary Doctorate from the Atlantic School of Theology in 1991.

Dr. Pam Brown died in 2020 at age 87, after a long and rewarding life. She leaves behind a legacy of countless physicians, community advocates, theologians, children and grandchildren who were lucky to be molded by her loving hands.