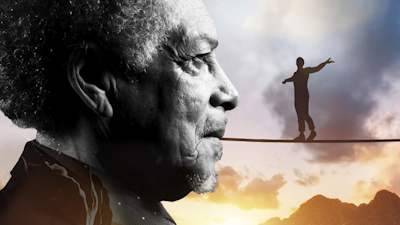 After the final performance of The Last Epistle of Tightrope Time on Sunday September 25, 2022 Neptune Theatre will be dedicating their actors’ greenroom to Walter Borden.

“Walter’s words, stories and indeed his very breath are embedded in the foundation of Neptune Theatre. This greenroom is now named after him in recognition of his valued place in our ongoing story” says Artistic Director Jeremy Webb. ”And, come to think of, of our place in his.”

For his long and distinguished career in the arts and as an activist, Walter has received many awards and honours, including: The Order of Canada (2006), Order of Nova Scotia (2014), Queen Elizabeth II Golden & Diamond Jubilee medals; African-Nova Scotian Music Association Heritage award; the Dr. Martin Luther King Jr. Achievement Award and the Portia White Prize. Walter has also won a Theatre Nova Scotia Robert Merritt Award and a DORA Award.

In 2022, Walter returned to Neptune Theatre with his play The Last Epistle of Tightrope Time: a show that he has been creating and living for forty years. With the premiere of this iteration, Neptune has decided to seize the opportunity to celebrate not just Walter’s impact on the company, but on the theatre community of Canada as a whole.